Start your Lenten journey with a reflection: What does it mean to be among the guardians of creation? How can YOU rise into this role?

Let’s shake off the ordinary this Lenten Season and begin a journey through the wilderness. Our wilderness in this case is the very planet that sustains us and all of creation. Instead of giving up any particular thing, commit instead to taking a first step into becoming a guardian of creation this season.

20So we are ambassadors for Christ, as if God were appealing through us. We implore you on behalf of Christ, be reconciled to God. 21 For our sake he made him to be sin who did not know sin, so that we might become the righteousness of God in him.

1 Working together, then, we appeal to you not to receive the grace of God in vain. 2For he says:“In an acceptable time I heard you,and on the day of salvation I helped you.”Behold, now is a very acceptable time; behold, now is the day of salvation. 3 We cause no one to stumble in anything, in order that no fault may be found with our ministry; 4 on the contrary, in everything we commend ourselves as ministers of God, through much endurance, in afflictions, hardships, constraints, 5beatings, imprisonments, riots, labors, vigils, fasts; 6 by purity, knowledge, patience, kindness, in a holy spirit, in unfeigned love, 7in truthful speech, in the power of God; with weapons of righteousness at the right and at the left; 8through glory and dishonor, insult and praise. We are treated as deceivers and yet are truthful; 9as unrecognized and yet acknowledged; as dying and behold we live; as chastised and yet not put to death; 10as sorrowful yet always rejoicing; as poor yet enriching many; as having nothing and yet possessing all things.

16“When you fast, do not look gloomy like the hypocrites. They neglect their appearance, so that they may appear to others to be fasting. Amen, I say to you, they have received their reward. 17But when you fast, anoint your head and wash your face, 18so that you may not appear to others to be fasting, except to your Father who is hidden. And your Father who sees what is hidden will repay you.19 “Do not store up for yourselves treasures on earth, where moth and decay destroy, and thieves break in and steal. 20But store up treasures in heaven, where neither moth nor decay destroys, nor thieves break in and steal. 21For where your treasure is, there also will your heart be.

Each day we’ll be presented with an action to consider along with the lectionary scriptures from that particular day. These are actions for our Carbon Fast. You may be coming late to the journey or missing some days…but that’s okay, come when you can, act when you can, share your experience with others…any such actions brought into your awareness may cause ripples and results farther than you’ll ever know.

While the task at hand can be truly overwhelming or even leading us into despair as we contemplate our societal damage to creation, stay on the path ~ keep stepping ~ take action ~  dive deeper into particular actions that speak to you ~ share with others. Keep in mind that any action will make a difference as demonstrated in The Legend of the Starfish that many are likely familiar with already, it goes… 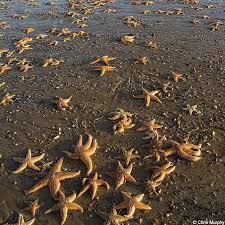 One day a man was walking along the beach when he noticed a boy picking something up and gently throwing it into the ocean. Approaching the boy, he asked, “What are you doing?”

The youth replied, “Throwing starfish back into the ocean. The surf is up and the tide is going out. If I don’t throw them back, they’ll die.” “Son,” the man said, “don’t you realize there are miles and miles of beach and hundreds of starfish? You can’t make a difference!”

After listening politely, the boy bent down, picked up another starfish, and threw it back into the surf. Then, smiling at the man,
he said…” I made a difference for that one.”

Some of you may have been journeying along this path for years or decades. Perhaps you were previously moved into action by the environmental books and reports from the 60s, the energy crisis of the 70s,  the 80s rainforest depletion, the climate change focus from the 90s, the tsunamis and superstorms of the 21st century. Perhaps you’re of a ripened age where many of the actions were simply the way of life. Share your experience here, on our facebook or twitter pages and with others.

Wherever we have previously journeyed, consider this Lenten season of 2020 as our opportunity to shed all that we think we know about being green, walking softly, reducing our carbon footprint, etc. etc., and begin a journey into newfound awareness in being A Guardian of Creation..