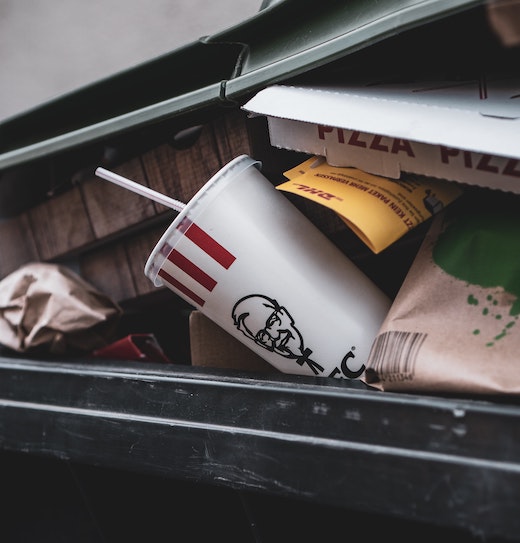 Today’s step is a check-up on how we’ve been doing since our 3rd Saturday step of food waste reduction. Remember to buy only the food you need and then consume or share all of that so nothing goes to waste.

Since our previous step already has content focused on food waste to be referenced, let’s focus in on the packaging today. The EPA’s guide on Reducing Wasted Food & Packaging. While the guide’s focus is intended for restaurants and food service provides, the info is useful to anyone concerned with reducing this massive waste stream.

23% of the waste going to landfills is packaging. While the report doesn’t contain a breakdown on how much of that is attributed to food packing, today’s photo alone should serve as an indicator. Take in the fact that the food packages appearing in the photo are simply the LAST containers such food was held in prior to being consumed or discarded.

Page 5 of the guide discusses tracking of the waste and references a taking tool spreadsheet available here.

1In the thirtieth year, on the fifth day of the fourth month, while I was among the exiles by the river Chebar, the heavens opened, and I saw divine visions.— 2On the fifth day of the month—this was the fifth year of King Jehoiachin’s exile— 3the word of the LORD came to the priest Ezekiel, the son of Buzi, in the land of the Chaldeans by the river Chebar. There the hand of the LORD came upon him.

8But you, son of man, hear me when I speak to you and do not rebel like this rebellious house. Open your mouth and eat what I am giving you.9 It was then I saw a hand stretched out to me; in it was a written scroll.

1He said to me: Son of man, eat what you find here: eat this scroll, then go, speak to the house of Israel. 2So I opened my mouth, and he gave me the scroll to eat. 3 Son of man, he said to me, feed your stomach and fill your belly with this scroll I am giving you. I ate it, and it was as sweet as honey in my mouth.

1 Then I saw another mighty angel come down from heaven wrapped in a cloud, with a halo around his head; his face was like the sun and his feet were like pillars of fire. 2In his hand he held a small scroll that had been opened. He placed his right foot on the sea and his left foot on the land, 3and then he cried out in a loud voice as a lion roars. When he cried out, the seven thunders raised their voices, too. 4When the seven thunders had spoken, I was about to write it down; but I heard a voice from heaven say, “Seal up what the seven thunders have spoken, but do not write it down.” 5Then the angel I saw standing on the sea and on the land raised his right hand to heaven 6and swore by the one who lives forever and ever, who created heaven and earth and sea and all that is in them, “There shall be no more delay. 7At the time when you hear the seventh angel blow his trumpet, the mysterious plan of God shall be fulfilled, as he promised to his servants the prophets.”8Then the voice that I had heard from heaven spoke to me again and said, “Go, take the scroll that lies open in the hand of the angel who is standing on the sea and on the land.” 9So I went up to the angel and told him to give me the small scroll. He said to me, “Take and swallow it. It will turn your stomach sour, but in your mouth it will taste as sweet as honey.” 10I took the small scroll from the angel’s hand and swallowed it. In my mouth it was like sweet honey, but when I had eaten it, my stomach turned sour. 11Then someone said to me, “You must prophesy again about many peoples, nations, tongues, and kings.”