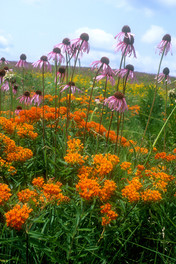 Consider planting native plants that require less water. Purchase organic seeds from your local nursery or online sources such as Seeds of Change

The majority of our focus during this lenten fast has been on reduction and the many ways that we can reduce our impact on the Earth. Today we are looking to partner with nature and natural process to further reduce the impact of carbon emissions.

Native plants are low maintenance obviously and require little to no care beyond keeping invasive species in check. Allowed to thrive native plants, shrubs and trees will prop up struggling animal and insect populations while also reducing carbon. Recent studies have pointed towards improved landscaping and coastal wetlands management practices could offset US carbon emissions by 21%.

1The LORD said to Moses and Aaron in the land of Egypt: 2 This month will stand at the head of your calendar; you will reckon it the first month of the year. 3Tell the whole community of Israel: On the tenth of this month every family must procure for itself a lamb, one apiece for each household. 4If a household is too small for a lamb, it along with its nearest neighbor will procure one, and apportion the lamb’s cost in proportion to the number of persons, according to what each household consumes. 5Your lamb must be a year-old male and without blemish. You may take it from either the sheep or the goats. 6You will keep it until the fourteenth day of this month, and then, with the whole community of Israel assembled, it will be slaughtered during the evening twilight. 7They will take some of its blood and apply it to the two doorposts and the lintel of the houses in which they eat it. 8They will consume its meat that same night, eating it roasted with unleavened bread and bitter herbs. 9Do not eat any of it raw or even boiled in water, but roasted, with its head and shanks and inner organs. 10You must not keep any of it beyond the morning; whatever is left over in the morning must be burned up.11This is how you are to eat it: with your loins girt, sandals on your feet and your staff in hand, you will eat it in a hurry. It is the LORD’s Passover. 12For on this same night I will go through Egypt, striking down every firstborn in the land, human being and beast alike, and executing judgment on all the gods of Egypt—I, the LORD! 13But for you the blood will mark the houses where you are. Seeing the blood, I will pass over you; thereby, when I strike the land of Egypt, no destructive blow will come upon you.14This day will be a day of remembrance for you, which your future generations will celebrate with pilgrimage to the LORD; you will celebrate it as a statute forever.

1I love the LORD, who listenedto my voice in supplication,2Who turned an ear to meon the day I called.3I was caught by the cords of death;the snares of Sheol had seized me;I felt agony and dread.4Then I called on the name of the LORD,“O LORD, save my life!”5Gracious is the LORD and righteous;yes, our God is merciful.6The LORD protects the simple;I was helpless, but he saved me.7Return, my soul, to your rest;the LORD has been very good to you.8For my soul has been freed from death,my eyes from tears, my feet from stumbling.9I shall walk before the LORDin the land of the living.10I kept faith, even when I said,“I am greatly afflicted!”11I said in my alarm,“All men are liars!”12How can I repay the LORDfor all the great good done for me?13I will raise the cup of salvationand call on the name of the LORD.14I will pay my vows to the LORDin the presence of all his people.15Dear in the eyes of the LORDis the death of his devoted.16LORD, I am your servant,your servant, the child of your maidservant;you have loosed my bonds.17I will offer a sacrifice of praiseand call on the name of the LORD.18I will pay my vows to the LORDin the presence of all his people,19In the courts of the house of the LORD,in your midst, O Jerusalem.Hallelujah!

23 For I received from the Lord what I also handed on to you, that the Lord Jesus, on the night he was handed over, took bread, 24and, after he had given thanks, broke it and said, “This is my body that is for you. Do this in remembrance of me.” 25In the same way also the cup, after supper, saying, “This cup is the new covenant in my blood. Do this, as often as you drink it, in remembrance of me.” 26For as often as you eat this bread and drink the cup, you proclaim the death of the Lord until he comes.

1Before the feast of Passover, Jesus knew that his hour had come to pass from this world to the Father. He loved his own in the world and he loved them to the end. 2The devil had already induced Judas, son of Simon the Iscariot, to hand him over. So, during supper, 3fully aware that the Father had put everything into his power and that he had come from God and was returning to God, 4he rose from supper and took off his outer garments. He took a towel and tied it around his waist. 5 Then he poured water into a basin and began to wash the disciples’ feet and dry them with the towel around his waist. 6He came to Simon Peter, who said to him, “Master, are you going to wash my feet?” 7Jesus answered and said to him, “What I am doing, you do not understand now, but you will understand later.” 8Peter said to him, “You will never wash my feet.” Jesus answered him, “Unless I wash you, you will have no inheritance with me.” 9Simon Peter said to him, “Master, then not only my feet, but my hands and head as well.” 10Jesus said to him, “Whoever has bathed has no need except to have his feet washed, for he is clean all over; so you are clean, but not all.” 11For he knew who would betray him; for this reason, he said, “Not all of you are clean.”12So when he had washed their feet [and] put his garments back on and reclined at table again, he said to them, “Do you realize what I have done for you? 13You call me ‘teacher’ and ‘master,’ and rightly so, for indeed I am. 14If I, therefore, the master and teacher, have washed your feet, you ought to wash one another’s feet. 15I have given you a model to follow, so that as I have done for you, you should also do. 16Amen, amen, I say to you, no slave is greater than his master nor any messenger greater than the one who sent him. 17If you understand this, blessed are you if you do it. 18I am not speaking of all of you. I know those whom I have chosen. But so that the scripture might be fulfilled, ‘The one who ate my food has raised his heel against me.’ 19From now on I am telling you before it happens, so that when it happens you may believe that I AM. 20Amen, amen, I say to you, whoever receives the one I send receives me, and whoever receives me receives the one who sent me.”21When he had said this, Jesus was deeply troubled and testified, “Amen, amen, I say to you, one of you will betray me.” 22The disciples looked at one another, at a loss as to whom he meant. 23One of his disciples, the one whom Jesus loved, was reclining at Jesus’ side. 24So Simon Peter nodded to him to find out whom he meant. 25He leaned back against Jesus’ chest and said to him, “Master, who is it?” 26Jesus answered, “It is the one to whom I hand the morsel after I have dipped it.” So he dipped the morsel and [took it and] handed it to Judas, son of Simon the Iscariot. 27After he took the morsel, Satan entered him. So Jesus said to him, “What you are going to do, do quickly.” 28[Now] none of those reclining at table realized why he said this to him. 29Some thought that since Judas kept the money bag, Jesus had told him, “Buy what we need for the feast,” or to give something to the poor. 30So he took the morsel and left at once. And it was night.31 When he had left, Jesus said, “Now is the Son of Man glorified, and God is glorified in him. 32[If God is glorified in him,] God will also glorify him in himself, and he will glorify him at once. 33My children, I will be with you only a little while longer. You will look for me, and as I told the Jews, ‘Where I go you cannot come,’ so now I say it to you. 34I give you a new commandment: love one another. As I have loved you, so you also should love one another. 35This is how all will know that you are my disciples, if you have love for one another.”